Data Science and counterintelligence. A case for a new model of terrorist networks detection.

Defense and intelligence sectors were one of the first to see the potential of applied Data Science. From smart pattern recognition in radars and autonomous weapons to assessing the risk posed by adversarial actors – contemporary international security system couldn’t do without advanced algorithms.

One of the disciplines that benefit from advanced mathematics is counter-terrorism studies. Its impact is particularly significant in the sub-field of theories aiming at discovering hostile networks. Today, mapping terrorist networks are one of the foundations of any counter-terrorism effort. It not only helps to understand the way terrorists think and operate but also plays a key role in designing an appropriate response.

Unfortunately, understanding how criminals organize themselves in a network is usually challenging. The data may be incomplete, the nature of the relationship between two criminals unclear, and the network may permanently evolve and reorganize. Overall, there are two main approaches to terrorism networks in academic literature. In the first one, researchers study known topologies of historical or contemporary criminal networks, to understand why particular structures have emerged. In the article recently published in ACM Transactions on Intelligent Systems and Technology, Waniek and co-authors contribute to an alternative, more theoretical approach. Its goal is to explain the structural properties of covert networks by explicitly modeling some possible dilemmas faced by the leaders of terrorist networks. In particular, academic literature on this topic usually concludes that criminals in general, and terrorists, in particular, face a constant tradeoff between secrecy and efficiency. On the one hand, the terrorist cells need to be densely connected to function efficiently. On the other hand, too many connections may jeopardize secrecy as they make terrorist plots traceable and, more importantly, at least theoretically preventable.

What characterizes the new model? Let’s assume that a terrorist network is composed of two types of agents: the leaders (top echelon of the organization) and the followers (lay members). The leaders are aware that they are the prime target of law-enforcement agencies who may use centrality analysis to identify them. To prevent this, the leaders would like to strategically modify the existing network or to create a new one in such a way that their centrality becomes lower than a certain, predefined threshold δ (a safety margin). The optimal modifications of the existing network cannot be computed in polynomial time given any degree, closeness, and betweenness centrality measures.

However, it is possible to efficiently create a network from scratches, designed specifically to hide the members of the higher echelon of the organization without limiting their leadership abilities. This network, shown in figure (Figure nr.1) below, has a group of leaders forming a clique (which ensures efficient communication among them) and a well-defined core of “captains” who are densely connected among themselves and who act as intermediaries between the leaders and all other members of the organization. Interestingly, such “inner circles” have been identified in some real-life terrorist networks such as, e.g., Al-Quaeda and IRA.

From smart pattern recognition in radars and autonomous weapons to assessing the risk posed by adversarial actors – contemporary international security system couldn’t do without advanced algorithms. 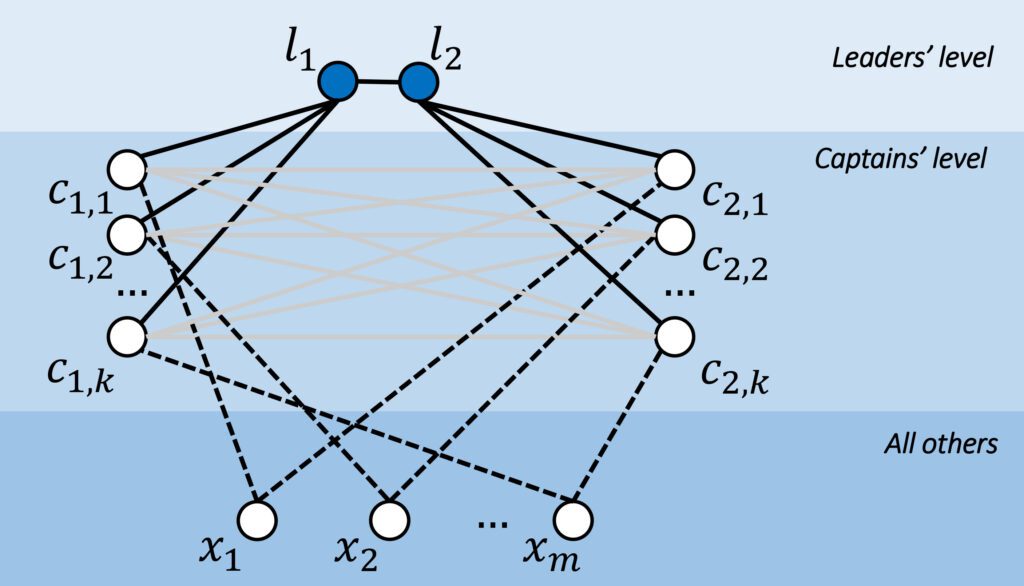 The presented analysis can be extended in various directions. It would be interesting to see new social network analysis tools, and centrality measures, in particular, that are immune (at least to some extent) against such evasion techniques. There is also an important reservation to be made: although our captain networks appear to be effective in terms of influence (i.e., they are empirically shown to grant the leaders a reasonable level of influence), they do not provide any worst-case guarantees on solution quality. Finally, it would also be interesting to examine whether there are special classes of networks for which the problem of hiding leaders can easily be solved or whether it is possible to construct a network that conceals certain edges. These problems require future scientific research as well as feedback from the expert (security, defense, intelligence) community.

The IDEAS NCBR’s working group that will deal with research in the field of computer vision will be headed by habilitated doctor engineer Tomasz Trzciński, professor at the Warsaw University of Technology and at the Jagiellonian University. The research agenda of the group will focus on issues related to the effectiveness of artificial intelligence models both in the context of the accuracy and pace of computations, as well as resources necessary for their operation.

IDEAS NCBR has signed the understanding on cooperation with Center For Artificial Intelligence and Advanced Robotics at National Taiwan University, and research centre CVC Barcelona working on computer vision.

How to beat humans. AI in video games

With the advent of processors and the progress of data science (particularly computer vision and machine learning techniques), non-human actors have been trained to compete and, in an increasing number of cases, win against their homo sapiens counterparts. The benefits of creating AI players are not just about designing a bot that might invent new gaming strategies or be a fun opponent to play against. On the contrary, training such models gives us deep insights into the modern science of algorithms

Dear User
we use cookies on this website to facilitate its use. This happens by saving information on the device you use when visiting our website. Taking care of your right to privacy, you can set your preferences regarding the use of cookies below. These settings can be changed at any time. However, please note that blocking certain types of cookies may have a negative impact on the use of our website and the services we offer.

Some of the cookies we use are essential for the website to function properly. You cannot change the use of these cookies in your preferences settings.

The cookies we use on our website can be divided into:
Necessary Always Enabled
these are files that are responsible for the proper operation of our website; their purpose is to enable the use of the services we provide, e.g. remembering the preferences for choosing the use of cookies, login authentication and ensuring security. These files may process the user's personal data. You cannot disable these files as part of your preferences settings, but you can block them in your browser settings. However, this action may result in some parts of the website not being available;
Functional
these are files that we use to personalize and optimize the use of our website. These files are used to remember the choices made regarding, for example, font size, language selection or content display resolution settings. These files do not process personal data. You can manage these files in your cookie preferences. If you do not agree, some functions of the website may not work properly;
Analytics
these are files that we use to collect information about the use of our website, e.g. the number of visits, time spent, time of viewed content or access sources. These files allow us to understand how you use our website, which helps to better match the website and displayed content. These files do not contain personal data, but only anonymous information not assigned to the user. These files can be managed in the cookie preferences settings. If you do not consent, we will not know when, how often, for how long and from what access sources you visit our website;
Others
Other uncategorized cookies are those that are analyzed and have not yet been categorized.
Advertisement
these are files that enable the provision of personalized advertising content to the user (based on the collected information tailored to the user's preferences and interests). If you do not accept these cookies, you will not be able to use our website.
SAVE & ACCEPT
Powered by